The Brooklyn-based firm offers an extensive fleet that includes boom lifts, duct lifters, scissor lifts, telehandlers and vertical lifts. “This machine has the wow factor we are looking for,” said Barr, who expects the super boom to feature prominently at large building and infrastructure construction sites throughout Victoria.

A 30-year veteran of the access equipment industry, Barr says the size and cutting edge technology used in the Genie SX-180 is extraordinary. “Over three decades, I’ve seen the largest machines increase in size from 120, to 135 to now 180 feet,” said Barr. “In a competitive market, you need to be doing more than simply offering a cheaper price. This is why we’ve acquired the Genie SX-180.”

According to Barr, the Genie SX-180 offers some surprising performance data. “For a machine so large, it only takes 4.5 minutes to get to 55 metres (180 feet), which is remarkable.” Other features of note include the 340-kilo lift capacity and the 60-degree rotating jib. “Other machines don’t offer this flexibility and this is another arrow in the quiver for the SX-180.”

As part of his enthusiasm for the super boom, Barr has registered “1800 MASSIVE” and will be running campaigns with the toll free number as a marketing centrepiece.

If you offer it – they will come

The SX-180 is only one example of Barr’s overriding belief in the appeal of new generation Genie equipment. Quick Access recently acquired the Genie Z™-33/18 electric knuckle boom, GS™-3369 RT, the rough terrain scissor, the GS™-3232 and a GS™-4047 narrow high reach scissors.

“My fleet is over 50% Genie, and my customers never complain when I send them a Genie. If you’ve got what the customers want, they’ll ring you. They want Genie, and we’ve got them.” 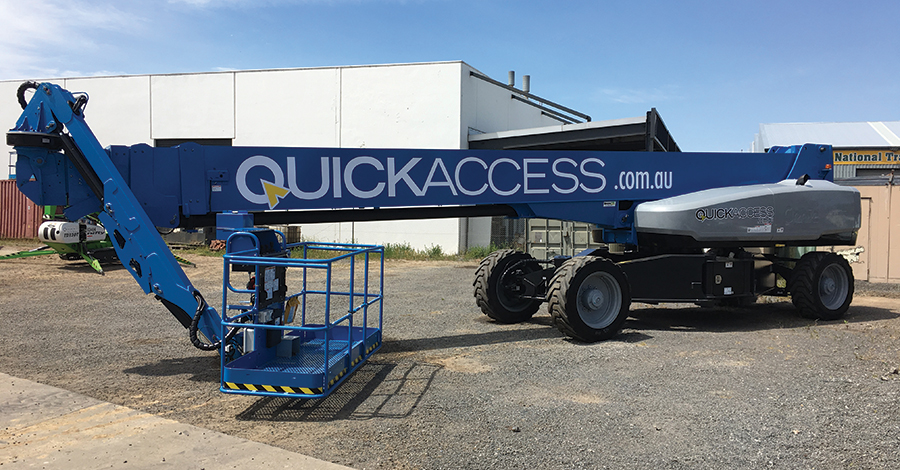