Following a rewarding career with one of the biggest brands in the hire business, Allen Besseling has launched the inventively named Hire Express, a new Sydney-based general hire company. 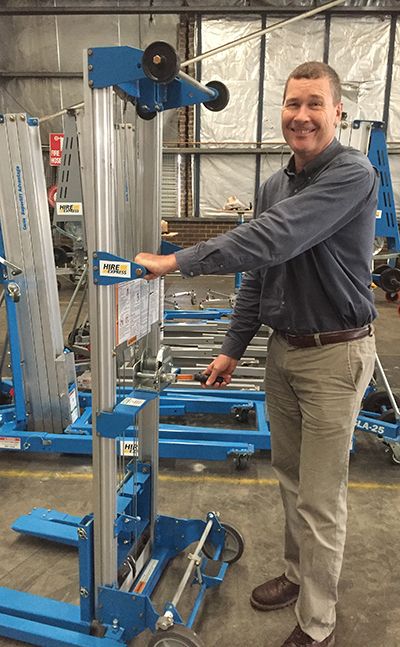 A former CEO of the Kennards group, Allen was instrumental in developing the firm’s branch network and its specialist business portfolio. Besseling’s other career highlights included helping to develop the Kennards Hire Pump & Power and Traffic divisions. Not a bad result for the former serviceman-driver, who graduated to branch manager, area management, as well as Kennards Hire Regional Manager.

As part of his illustrious career, Besseling partnered with Kennards Hire to launch its Lift & Shift business, a venture which has proven to be a major success. Moreover, 30 years in the hire industry has taught the Sydney-sider what it takes to achieve innovative success. It’s this knowledge and expertise that is set to make Hire Express a winner with the assistance of Genie.

“Hire Express will be a general hire company and in terms of Genie, we are supplying their aluminium products,” said Besseling. “We are targeting medium to large trades and tier one contractors through a centralised distribution model, using online and direct sales as the major channels.”

Hire Express is launching its operations with the Genie GL™ series, including the SLA™ and SLC™ models. “We have most of the aluminium series to be honest, including the gas hoists, the Genie Super Lift Advantage™ SLA- 25, the SLC- 18, SLA-10 and the SLA-15,” said Besseling.

Genie is generic for aluminium

A sketch for Hire Express grew from Besseling’s belief there was a gap in the market for online hire specialists, along with a desire to return to the industry he’s been a meaningful part of since 1986. “I took a small career break a couple of years ago and farmed,” said Besseling who’s been collaborating with Genie since 1989. “However, I identified an opportunity in the online space and realised I love hire. After a stint in semi-retirement, I got itchy feet, and I’m glad to be back.”

Working in partnership with the Genie aluminium range is a no brainer for Besseling. “I’ve looked at other products around the world, but I keep coming back to Genie because its products are tried and true,” said the hire specialist. “It’s a generic brand, and everyone asks for a Genie rather than for a material hoist. It’s a name that is synonymous with the aluminium space.”

Hire Express will be located in Blacktown in a large DC warehouse. “This means the distribution will be centralised, and we are employing an experienced team to accommodate the market’s needs,” said Besseling. “It’s a brand-new business starting with 100% new product. So, it’s a major capital investment, and I want to go with a company such as Genie, which will deliver an excellent Return on Investment (ROI).

The ROI offered by the Genie aluminium range is very attractive, along with the machine’s reputation for low maintenance, according to the Hire Express boss. “Some Genie machines have even lasted as long as 20 years, and they come with a design that has stood the test of time.”