Genie is targeting the Kimberley in Western Australia’s far north, as a strategic growth market for its holistic customer service solution, Genie® 360 Support.

Famed for its diamond mining, the Kimberley region is bordered on the west by the Indian Ocean, to the north by the Timor Sea, in the south by the Great Sandy Desert and the Pilbara. It shares an eastern border with the Northern Territory. The region’s biggest towns are Broome, Derby and Kununurra.

Rheece Mengler, a Genie Service Technician based in Karratha in the Pilbara, recently travelled the almost 900 km to Broome, and then to Kununurra, to connect in person with some of the firm’s northernmost Australian clients. “I oversee the Pilbara and the southern parts of the Kimberley,” said Mengler.

Putting a name to a face

In the Kimberley, there are numerous outposts of some of the larger hire firms, including Caps Hire, and independent businesses. “We did a run out to Kununurra to catch up with some hire firms and a small company at Derby,” recalled Mengler. “When I arrived in the Kimberley, our customers were thrilled that I made the effort to call in. They usually just get on the phone and talk to tech support.”

Having face-to-face meetings with an employee from one the world’s biggest AWP manufacturer is a unique opportunity for hire companies based in the Kimberley. “It underlines once again our commitment to customer service whether you’re in Sydney, Melbourne or Kununurra,” noted Mengler. “Since my visit, hire firms and building companies will call me up now for virtually anything. Maybe they’re ordering parts and need a clarification. It’s about delivering the Genie 360 Support that Genie is renowned for to one of Australia’s most isolated regions.”

The majority of the firms in the Kimberly hire small boom and scissors lifts. “Genie® GS™-1932 scissor lift, Z™-34/22 N articulated booms and GS-2669 RT scissor lifts are quite common in the Kimberley,” noted Mengler, who is an advocate of Genie 360 Support.

Genie 360 Support reflects the AWP leader’s commitment to end-to-end customer service solutions. Genie 360 Support takes care of every aspect of customers’ AWP needs from initial sales and service through to technical support, operator training and even comprehensive management of an ageing fleet.

“Many of the mining companies in the Kimberley and Pilbara prefer using new or near new machines; therefore, we talk to hire companies about the benefits of Genie 360 Support, and the value of trading in ageing machines for new stock,” said Mengler.

“It’s all about keeping the mines happy.” 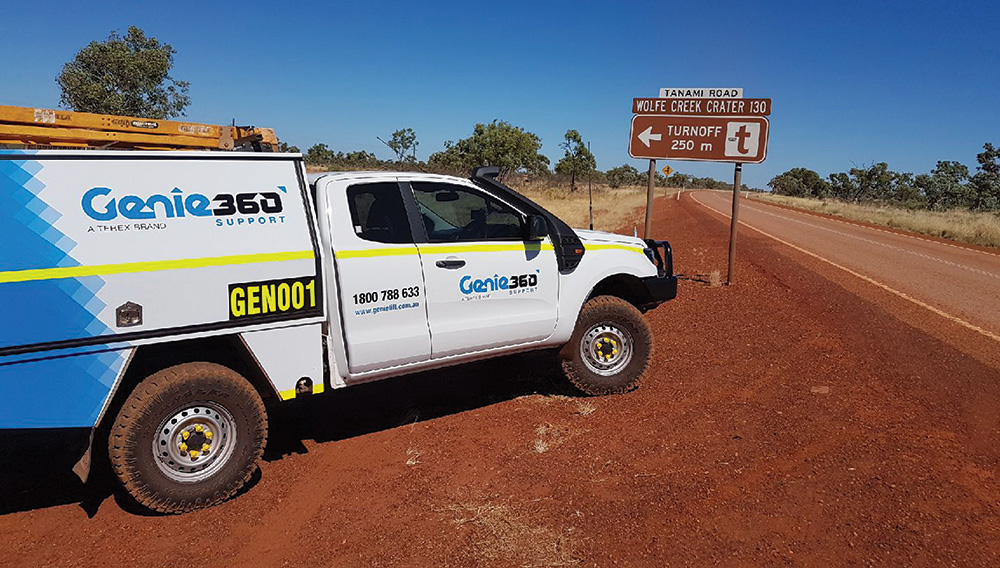