Auslift and Genie Give Government Minister a Lift

When Victorian Minister for Energy, Environment and Climate Change Lily D’Ambrosio wanted to see firsthand an example of the benefits of an agreement between her government and the Sustainable Melbourne Fund to help businesses reduce energy costs, one contender stood out.

Perched on the roof of packaging manufacturer Class Plastics in Melbourne’s western suburbs are 1,460 solar panels generating a massive 365kW of power and saving the company $100,000 a year on electricity.

The problem was: Who could find a vantage point for Minister D’Ambrosio to view the rooftop array of solar panels?

It was George Surace, sales manager of general hire firm Auslift, and Genie who came to the rescue. “The event was a great idea to help showcase the largest private installation of solar panels on the roof of a factory in Victoria. Only Toyota has a larger rooftop solar panel installation,” said Surace. “The task assigned to Genie and Auslift was to provide a safe and effective way for the Minister and some government officials to view the installation.”

Surace got wind of the ministerial visit in May through his government contacts and immediately asked for help from David Greene, Genie Regional Sales Manager Victoria/Tasmania, Terex Australia. “With its extra lift capacity, the Genie® GS™-5390 RT scissor lift was the appropriate aerial to get the Minister the best view of Class Plastic’s solar panels,” said Greene. “A normal scissor lift will hold two operators only. The Genie GS-5390 RT scissor lift will hold many more people than that, making it perfect for this event.”

The ministerial visit was a valuable opportunity to showcase Genie and Auslift, noted Surace, who operated the machine and gave the Minister a safety induction. “She asked about the role of hire companies and machine supply companies in the field of solar installations.

As for his decision to seek David Greene’s support, Surace said it was a no-brainer as Genie is an RT leader. “I wanted to test drive the Genie GS-5390 RT unit, and David was happy to oblige. Working with Dave is always easy and the Genie machines are great units. There’s never a drama working with Genie.” 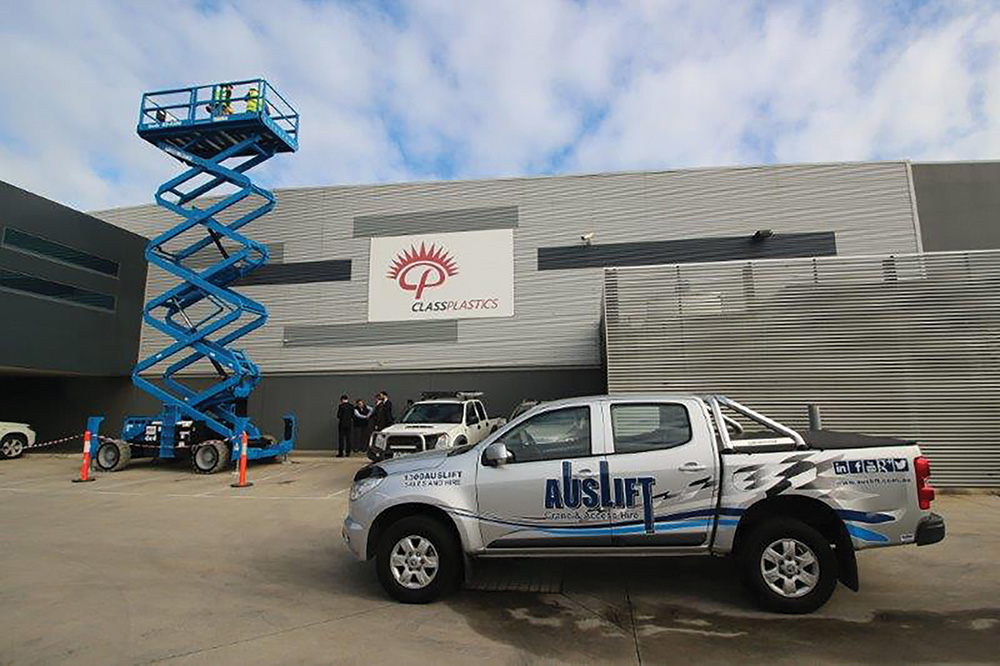