Formerly called South Coast Forklifts, Hire Australia started in 2009 as forklift specialist. It has since focused increasingly on access equipment with Genie, a prominent brand among its 55-strong fleet.

In autumn 2017, Reeves read with interest an article in Blue News, about how a Genie® SX™-180 boom lift was slashing the costs at a Tasmanian wind farm and boosting efficiencies.

Already aware that within a two-hour radius of Warrnambool, on the south-western coast of Victoria, there were 15 wind farms with an average of 60 turbines, Reeves started his research. “We began talking to the local windfarms about the possibility of hiring smaller access equipment,” he said. “We then opened discussions about the opportunities associated with a Genie SX-180 boom lift and how we could align Hire Australia with their businesses.”

At this point, Hire Australia invested in a Genie SX-180 boom lift, and immediately the response from wind farm operators was encouraging. “The feedback has been positive, and we have plenty of bookings for the machine in 2018,” says Reeves. “Windfarm operators like the fact that there is a Genie SX-180 boom lift available locally and they love its operational speeds. It gets up and down quickly, which is great when the wind picks up.”

The potential cost savings is another tick in the box for the Genie SX-180 boom lift. “It’s more valuable to wind farm operators because if there is poor weather, they’re not paying for a crane to sit idly on standby all day,” notes Reeves. “Then if there is an hour’s gap in the weather, the Genie SX-180 boom lift can get in and do some maintenance work.” Moreover, the telescopic boom with its vertical reach of 180 ft (54.9 m) and a horizontal reach of 80 ft (24.4 m) is probably 50% cheaper to hire than a crane, according to Reeves.

Apart from windfarms, the Genie SX-180 boom lift is assisting with the refurbishment of Warrnambool’s landmark Fletcher Jones factory. “The boom is also ideal for telecommunications towers,” says Reeves. “These towers are around 40 – 45 metres high and the Genie SX-180 boom lift easily handles these heights.” A truck-mounted boom trucked-in from Melbourne, which is more than three hours away, was previously used to service these towers.”

The entrepreneurial Reeves has taken to social media to publicise the potential of the Genie SX-180 boom lift. In April, a local tradie, Chris Dowling, posted on Hire Australia’s Facebook page that “he’d never go up in one of those things.” The acrophobic Dowling took it from here: “It was just your average comment on Facebook. Matt was kind enough to offer $1 per foot that I go up, to charity, which is the Royal Children’s Hospital. I couldn’t say no to that.”

Reeves created an event “Chris versus Goliath” on Facebook, including an entertaining video of Dowling’s white-knuckled ride, while the hell-raising, fundraiser netted $5,500 for the Children’s Hospital. “We raised this amount via pledges from our Facebook followers, and by charging $25 to those hardy souls who followed Chris’s lead and took the Genie SX-180 boom lift to the top. There was a donation from Genie Australia, as well as support from other local Warrnambool businesses and the Lions Club.”

Moreover, the event garnered widespread media coverage including a significant editorial in the Warrnambool Standard and ABC radio. The media reporting is sure to help promote Hire Australia, and the capabilities of its boom lift goliath to the local business community. 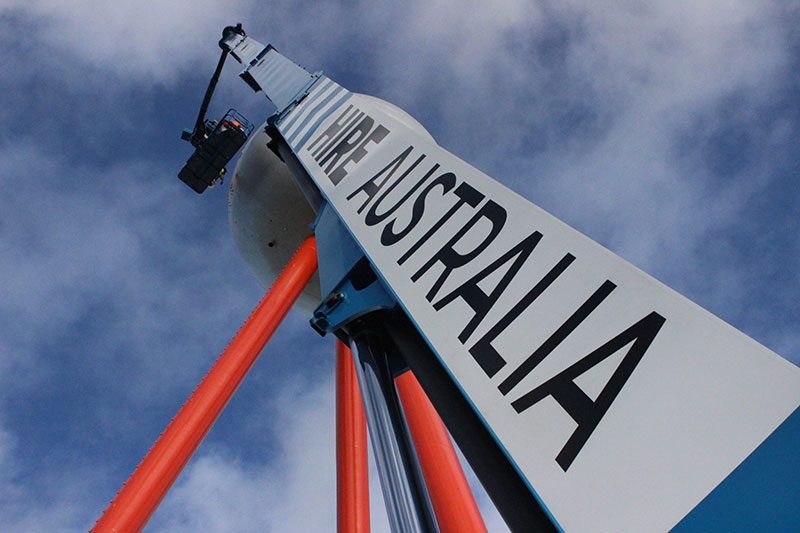